.NET 5.0 and Guidance for Library Developers 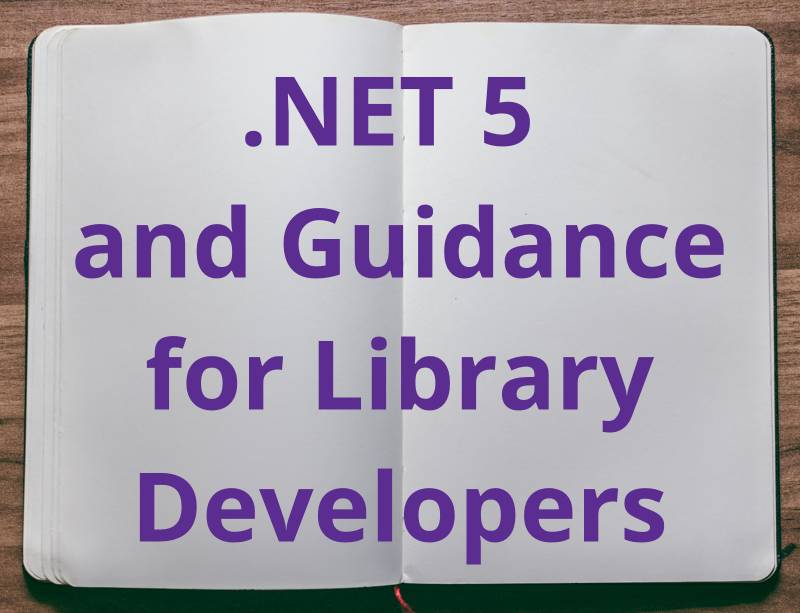 The release of .NET 5.0 in November 2020 marked a significant milestone for the .NET ecosystem.

In December 2014, Microsoft introduced .NET Core as a foundation for open source and cross-platform support, with the goal of .NET having a single code base.

In September 2016, Microsoft introduced the .NET Standard as a set of APIs that all .NET platforms have to implement.

In May 2019, Microsoft provided clarity on the future of .NET that:

At the same time, Microsoft introduced the vision for .NET 5 as the combination of “.NET Core and the best of Mono to create a single platform that you can use for all your modern .NET code”.

Retrospectively, the approach of the .NET Standard has been very successfully to provide uniformity within the .NET ecosystem. It also has suffered from a number of issues, including the delay between specification changes and the implementation of those changes in the individual platform code bases.

.NET 5.0 adopts a different approach to establishing uniformity within the .NET ecosystem.

.NET 5.0 is the beginning of a single cross-platform .NET runtime and framework implementation that unifies .NET Core and the .NET Standard. It provides the same runtime behaviours and developer experiences across all platforms with a set of APIs, languages, and tools that target a broad set of application types, including: mobile, cloud, desktop, and IoT.

Microsoft will NOT be releasing a new version of .NET Standard. .NET 5 and all future versions will continue to support .NET Standard 2.1 and earlier, and should be considered the foundation for all new code.

net5.0 is the new Target Framework Moniker (TFM) for .NET 5.0. It combines and replaces the netcoreapp and netstandard TFMs that are specified in project files.

Multiple frameworks can be targeted, using <TargetFrameworks> as per the following example.

net5.0-windows will be used to expose Windows-specific functionality, including Windows Forms, WPF and WinRT APIs.

Microsoft have updated their documentation to provide guidance on when to target net5.0 vs. netstandard.

The only reason to re-target from .NET Standard to .NET 5.0 would be to gain access to more runtime features, language features, or APIs.

You can multi-target .NET 5.0 and .NET Standard to get access to newer features and still have your library available to other .NET implementations.

Most widely used libraries will end up multi-targeting for both .NET Standard 2.0 and .NET 5.

Supporting .NET Standard 2.0 gives you the most reach, while supporting .NET 5 ensures you can leverage the latest platform features for customers that are already on .NET 5.

Here is the Cheat Sheet for guidance on TFM usage:

Boiling it all down to one sentence: in order to enable the largest reach of your library, multi-target both netstandard2.0 and net5.0.

If you have an existing library that already targets .NET Standard 1.x: