I have added a bundle of new notebooks: 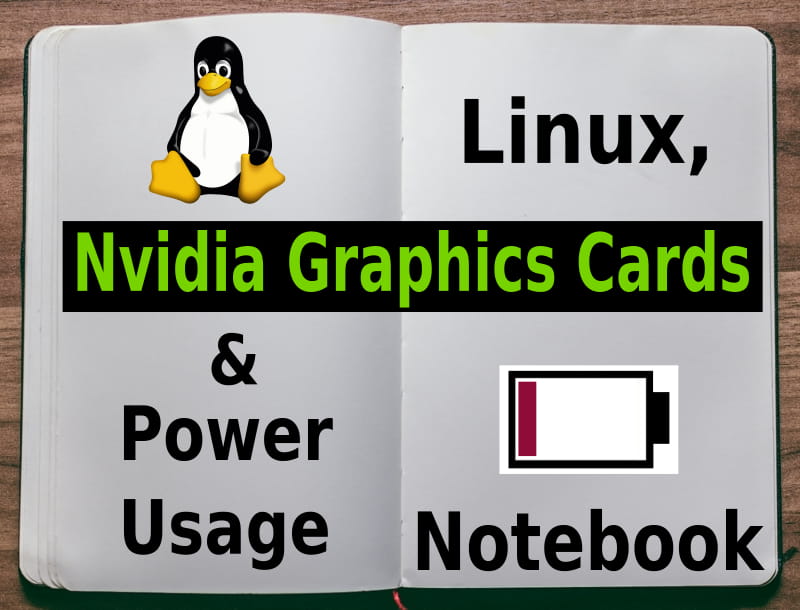 I have some fairly common and reasonable goals for the use of my laptop:

With a desire to run Linux (which regardless of this GPU discussion is known to be challenged regarding its power saving) I don’t expect this 4-cell battery to last all day… or even half a day while running a minimal load! However, I know from experience that I can squeeze at least a couple of hours of battery life out of the laptop when running a minimal load on Windows.

Windows has Full Control of the Nvidia GPU

Windows has the ability to fully utilise Nvidia Optimus technology, use the Integrated Intel Graphics for rendering and completely shut off the Nvidia GPU. However, when necessary (for example, when doing anything graphically intensive such as gaming), Windows will dynamically and seamlessly switch to using the Nvidia GPU for rendering. It can do this because the Nvidia drivers for Windows support this on-the-fly muxless switching functionality.

Being able to dynamically shut off the Nvidia GPU saves the battery considerably!

On this laptop, the display ports are wired directly into the Nvidia card, so all operating systems are forced to turn on the Nvidia GPU in order to extend the display to another monitor. But when that second monitor is unplugged, Windows can immediately and seamlessly shut off the Nvidia GPU and save power.

The proprietary Nvidia drivers for Linux however do NOT provide the same switching capability. In fact, the historical and current state (as at the year 2018) of using various proprietary and community-hacked open-source drivers on Linux is quite simply abysmal and confusing as hell. Valiant efforts such as Bumblebee, Nouveau and nvidia-xrun are in various states of disrepair - whether it is a performance issue or lacking support for modern graphics libraries such as Vulkan. All of them suffer from usability issues. Unlike Windows users, why should Linux users be forced to reboot their machine in order to turn on/off the Nvidia GPU? Why should we need to run different X sessions?! Why can’t the same hardware work seamlessly like in Windows – powering up the GPU automatically and only when necessary and not killing my battery when the laptop is unplugged?

Nvidia has not provided equivalent driver functionality for Linux and have thus caused (and are still causing) many years of unnecessary pain and suffering to the Linux community. If it was a technical issue with the Linux code then that could have been solved by now. Nvidia is still acting like the ‘old’, arrogant Microsoft from the 2000’s (and all credit to Microsoft - consensus now is that they have drastically improved by embracing the community, open-source and other platforms such as Linux).

One example of where the Linux community has been ignored repeatedly for years is on this Nvidia forum where an Nvidia developer explicitly stated “NVIDIA has no plans to support PRIME render offload at this time” meaning that they won’t provide functionality to allow the Integrated GPU to perform the rendering and allow it to effectively pass-through to the display ports attached to the Nvidia GPU for display to an external monitor. In 2016, that statement spawned further discussion on this thread on the Nvidia forum where Nvidia continues today to ignore members of the Linux community.

Regardless of all the challenges, my desire to run Linux on this laptop still is greater than my desire to run Windows… Below is a comparison of some of the more interesting graphics driver configurations I tried in an effort to find one that gets close to fulfilling my forementioned goals.

All tests were run with the same common configuration:

Some of the measurements are missing, and that is either because they were not available at the time or I ended the test early due to the result being sufficiently obvious for my purpose.

Battery usage percentage and time estimate on Linux was measured using the Battery Time widget. On Windows the usual power/battery icon in the notification area in the taskbar was used.

Immediately one can see a difference in the baseline power usage between Linux and Windows when only the Integrated Intel Graphics chip is being used. This is evidenced by the difference in battery charge at 15 minutes, where Windows was 94% battery charge while Linux was 92%. The difference is attributable to the fact that I had not yet tuned this installation of Linux for power savings – so that means the actual battery time I will experience after the tuning will be better than measured here.

This same Linux maximum power saving option also is significantly better than the Linux configuration where the Bumblebee intel-virtual-output approach is churning CPU power and the fan in order to extend the display to an external monitor and copy over the video buffers.

Testing showed that my battery actually lasted more than an hour when the Nvidia drivers were configured with the 0x3 maximum power saving mode.

On the maximum performance 0x1 setting, the Nvidia GPU regularly entered Performance Level 4 (even just by moving the mouse). With the higher graphics clock and memory transfer frequency of that Performance Level, the temperature of the GPU was constantly higher – causing the normally passively cooled GPU’s fan to kick into high gear and make excessive noise and heat while the machine was simply idling.

The increased complexity for users, compromises in performance, compatibility issues and incomplete support (such as not working with Vulkan) required by the open-source efforts is not appetizing.

The analysis above has shown that most of my goals can be achieved simply by using the proprietary Nvidia drivers and keeping the Nvidia graphics turned on with:

The only unfulfilled goal is the “ability to use the high performance of the Nvidia GPU (e.g. for Data Science) without being forced to reboot or log off/on”. This 1060M graphics card unfortunately does not support setting a power limit. If it did, I possibly could set the PowerMizerDefaultAC permanently to 0x1 high performance mode and as desired use the command line utility nvidia-smi with the -pl parameter to set the maximum power limit – without a log off/on or restart.

How to Configure the Power Savings Modes?

In order to configure Linux and the proprietary Nvidia graphics drivers to run with my chosen power savings mode, perform the following procedure.

Configure the Nvidia driver to use specific PowerMizer settings.

You may need to change the BusID to match your PCI configuration. To find your BusID, execute:

Then find the first number that corresponds to your Nvidia card. In my case above, the value is “01”. Removing any padded zeros, then format that number as PCI:<that number>:0:0 – i.e. PCI:1:0:0.

The Nvidia driver relies on ACPI in order to know when the laptop switches from running on power to running on battery and vice versa.

To check if the ACPI daemon is running, execute the command:

If it is not enabled:

If you looked in the log file you would see an expected error at this point.

And if you tried the following command there also would be an error.

And reconnect the power cord:

You can also use nvidia-settings to see the current power source by checking the GPUPowerSource read-only parameter (0 = AC power, 1 = battery)

The following values are valid for the bytes:

The adaptive setting for both battery and AC power (0x3333) is always desired for power savings so that the GPU can scale down to the smallest possible clock frequency at any point in time – instead of remaining at the maximum clock frequency of the power mode you specify.

To see the different Performance Levels and their minimum and maximum clock speeds, you can use the Nvidia X Server Settings application.

Also of note, when on battery and running PowerMizer 0x3 maximum power savings, I could not make the Performance Level change from Level 0, nor could I make the clock speed go above 151 Mhz - no matter whether a second monitor was connected or I had animated graphics applications running.

As soon as I plugged in the AC power however, the clock speed immediately jumped to 569 Mhz while on Performance Level 0 – even when running some animated graphics applications.

Another way to look at the Performance Levels is via the command line with $ nvidia-settings -q GPUPerfModes which for me resulted in:

PowerMizerDefault is the power setting when running on battery.

PowerMizerDefaultAC is the power setting when running on AC power.

Note: the Performance Levels do NOT equate to the PowerMizer mode settings! With my Nvidia GPU: